Average 2 Alpha
Home Stoic If There Is a Heaven... 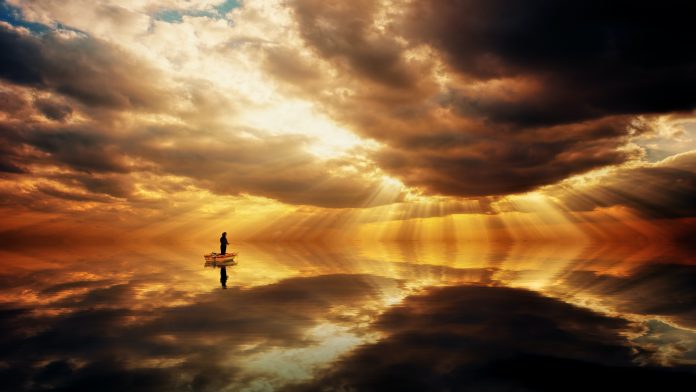 One of the flaws in our thinking as humans is that we can’t see the effects of many of our actions. We’re stuck in the present and the fallout of how we live in the present isn’t realized often for a long time, so long that we rarely connect the habit with the result.

We end up broke but we equate it to chance or luck, rather than seeing those tiny bad spending habits, or the habit of putting off our work.

We wake up one day with 30% body fat and we blame that on genetics or simply ‘how life goes’, rather than on the missed workouts, the cereal we eat every morning, and the habits that led to us getting fat.

So, we don’t change. A day goes by, then another, then a few years, then, as we near our end we realize that we’ve wasted our lives living in an inferior fashion. We fall far short of our potential.

He’s you, but he’s more fulfilled, happier, proud, he’s at peace. He’s stronger, tougher, more successful, and his impact on those around him is far more positive and powerful.

You see the woman he married, the kids he raised, the house he lived in, and compared to what you actually achieved, it’s unrecognizable.

If there is a heaven, time doesn’t exist there. As humans we’re bound by time and space. We see only what’s in front of us, what we’re doing. We don’t see future effects of those tiny habits.

But life is made up of the minutia, the seemingly insignificant is really very significant. We’ll only realize this when we’re dead, and if time doesn’t exist in the afterlife and our spirit moves on to another place, we’re seeing this unfold right now, we’re watching our waste, the tragedy that is wasted potential.

You can be watching yourself right now, seeing how you’re living, making the same mistakes over and over again and cringing every time you do it, helpless to tell yourself the horrors that they lead to.

And bad habits truly do lead to horrific consequences. Imagine coming face-to-face with who you could have been, who you were made to be, and being hit with the realization that this could have easily been you had you had just a little more grit, a little more discipline.

In the present, you know these mistakes are mistakes, yet the overall effect they have on your life isn’t clear. You see them as small, insignificant, but they compound like an investment, magnifying their effects the longer you continue to do them.

Of course, the same is true for the positive. The good habits you have may not seem to yield massive results right now, which often leads to not adhering to them because we don’t immediately see their fruits.

It’s harder to have only good habits, but it’s also more rewarding. It’s easier to have bad habits, to act on your every whim and desire no matter how destructive they may be, because these bad habits typically bring an immediate reward in the form of a dopamine release.

The good habits are doing the right thing now to secure a better future.

The bad habits are doing the wrong thing now to ensure an immediate positive feeling, one that’s inevitably followed by a depressing, guilty, or shameful feeling.

Judge Yourself. Don’t Condemn Yourself.

This is where we’ll bring in some advice that goes counter to how we think in our modern society, one built on the back of Christianity, but often on a false interpretation of guidance from the Bible.

We’re told not to judge. Don’t judge someone else because you have no right to. As a flawed individual, first look at yourself.

“Let he without sin cast the first stone.”

Judgement, in the biblical sense, however, means more to not condemn than to correct.

Our modern culture has taken this ‘don’t judge stance’ to its extreme. We’ve removed right and wrong and made it subjective. Thus, you can’t judge anyone about anything because that’s ‘their truth’.

But as soon as we turned ‘the truth’ into ‘your truth’, we doomed ourselves to be unable to see right and wrong, even when it comes to how to best live.

Applying this to us as individuals, we’re told not to judge ourselves, yet we can’t hide from the shame of bad action, bad habits, and a wasted life.

So we must judge ourselves, but we shouldn’t condemn ourselves.

Piling on the shame only makes the bad habit a more likely fallback action.

If heaven does exist, and time doesn’t exist there, we’re surely judging our actions right now as we speak. We’re judging them based on the realization of where they lead.

With any ounce of intelligence and foresight, we should be doing the same thing right now.

Why not live your best life?

A life dominated by good habits, hard work, discipline, learning, evolution, and kept promises to yourself.

See your unfulfilled dreams. See addiction, the prison of being unable to change a bad habit because it’s so engrained in who you are. See yourself broke, alone, no family or friends, no money, no freedom. See yourself in the prison that is of your own making if you don’t make the right decision right now.

Practically speaking this is incredibly simple.

Things like working out 5 days a week with weights, eating right, reading for an hour a day, structuring your work day to have no distractions and optimal production. Family time. Prayer time. Meditation time. Stretching. Even spontaneous time, hobbies, things that make you laugh, things you enjoy.

Counter these bad habits with their correct and beneficial counterpart.

Finally, we come to the moment of truth. The idea of committing a bad habit enters your brain. See it for what it is, the hell that it will bring, and choose – in that very moment – to act on its positive counterpart.

Those moments are everything. The quality of your life can be found in the moments where you make the right choice, the disciplined, positive action.

The benefits are never immediate, other than an increase in confidence and pride in who you are, who you’re becoming, and how you’re living. But over time truly magnificent improvements can be made on the back of tiny, seemingly insignificant decisions.

Ideally this article will make you look at your life in a slightly different way. Maybe it will wake you up to who you can be, from a good angle and a bad one.

We all have the opportunity to live great lives, but also horrible ones filled with waste and shame. The decision is ours.

No one is to blame for how your life ends up, from a positive or a negative standpoint. Taking responsibility for the habits in your life is the best way to live a great life, one that exceeds your dreams and aspirations, one that goes far beyond what your imagination can conjure.

It’s all within your grasp. You just have to get a handle on the small stuff. That’s the path to happiness, peace, and power.